Here's a universal truth courtesy of my friend, El Capitan: "The more a person has to tell you that they're bitchen, the less they are."

This kind of extends to the line up, doesn't it? Typically the person who throws the most stink-eye, cops the most attitude or claims it the hardest isn't the most skilled guy out there. Tonight I surfed some surprisingly fun, low tide wedges. Nothing consistent, actually it was pretty fickle- but every so often a jewel would come barging through and if you were in the right spot you'd snag a cobalt blue, silky smooth, head high runner. The cosmic surf lottery happened to smile on me for an instant and I was perfectly positioned for the gem of the session- a doubling up, left hand power wedge with a thick shoulder perfectly tapering down into a long buttery wall.

Man, this was going to be good. I knew exactly how I'd come off the bottom. I could see where I'd stall for the cover up then I'd rip the guts out of that wall up ahead. There was only one problem, paddling hard to intersect that sweet little section was the best guy in the water. He was definitely the alpha male out there- popping airs, wrapping big cutbacks and styling through hairball inside sections like it was the kindergarten playground. It suddenly dawned on me- I was going to get stuffed. Big Papa was going to feed. 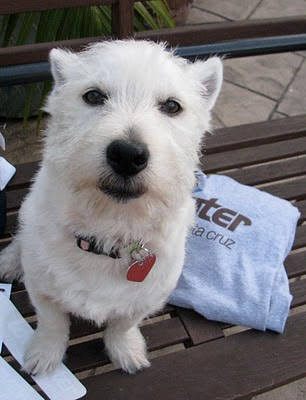 Photo: Lilly's got nothing to prove.
But then something funny happened, the guy spun around at the last second, he was perfectly positioned to drop in on but that's not what he did. At the last second he pulled up short, sat up, looked right at me and busted out a giant whoop! As I flashed by, I could see the smile on his face. He screamed out at me- wagging his head and just letting that yell linger. I know that hoot was no verification of my ability (believe me, I was barely holding it together), this was something else. It was a connection, an insider's knowledge of how good that wave was going to be- something from the gut, something pure... and it wanted out. Aaaahhhhh! Just like that.

It's typically true: The real rippers don't need to tell you how bitchen they are, their actions speak for them. Even if it's just a hoot.
Posted by John Ashley at 9:58 PM