A Baja Surf Trip Dissected: Details for the detail minded. 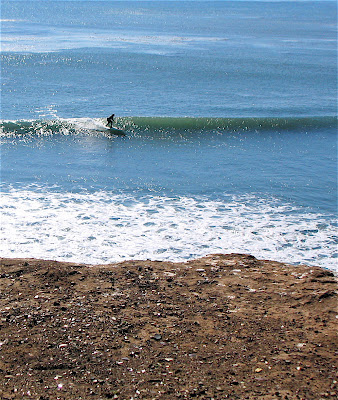 The drive in is really straightforward. We're up and over the border by daybreak. In three hours we're setting up camp at the point and cracking our first beer.

There was a time when we'd cross the line earlier, usually around 3 or 4 am and we'd be at the point for a morning surf. We don't do that anymore. On that road, bad things most often happen at night. You may have heard the story of the three southbound surfers who were carjacked and pistol whipped just ten minutes over the border; they lost everything. These guys are friends of mine, I heard their story first hand. Walking into the darkness with a pistol to the head while begging for your life? Sorry, you can have the early session- I only cross in daylight now.

Driving in Mexico can get exciting.
It doesn't have to be dangerous though. One of the most important things is to slow down. Once you're off the TJ to Ensenada toll road, you're running a route designed in the 70's for utility not speed. Mex 1 was meant to be trucking route for moving cargo from Point A to Point B. Check out the roadside crosses marking the spots where wannabe Formula 1 drivers have burned in; sobering reminders of were your speed thrills might ultimately lead you.

Here's an interesting observation: In Baja, you can drive 55 mph or 85 mph and you'll end up there at the same time. Many times I've been passed by guys blazing down to the tip only to pull into a taco stand down the road and find the same guys sitting there. It only takes one gas stop or a roadside tire sprinkling to eat up all the extra minutes your lead foot has bought you. Call it a wrinkle in the space-time continuum or just Baja weirdness but it's happened enough times to convince me that the danger increments that accumulate with added speed aren't worth it. Especially if you're like me and you know where the good taco stands are. 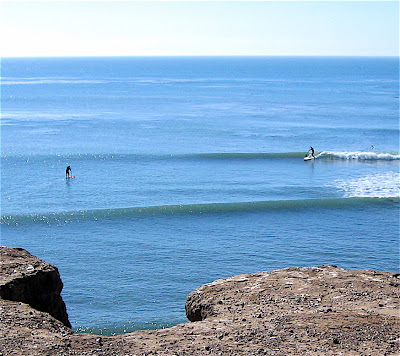 Top: Does it look fun and empty? It is and was... and it's there right now breaking all by itself. Kraig Surplus heading north.

Bottom: The stand up paddle board- the answer to the flat day Baja blues. Matteo W. finding a little right to jam along with.

By the Way: Be sure to check out the additional Unwritten Baja Rules posted by SRFNFF and MichealF. Some funny and insightful observations by a couple of guys who've obviously been there.
Posted by John Ashley at 3:14 PM