Caught Inside: A Swell Peaks in one Solid Set 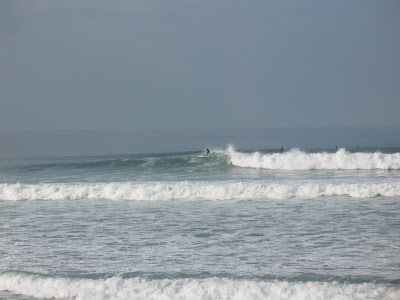 Ever been caught inside?
A two hundred yard wide swath of double overhead, pissed off white wash rolling at you like a subterranean tsunami death surge? A pitching blue wall stalking you and holding, holding, holding... until it's locked on and singled you out for termination. Been there? Know that feeling?

Friday's swell peaked in one solid set that caught most of us with our pants down. Kelly Kraus sent me this:

"THAT set was epic. I had actually caught a wave just before the set came through and was far over inside, safe in the channel, paddling back along the shoulders of the whole batch with the best view possible.

There were so many good waves in that set I lost count. Maybe 6 or 7 beautiful rolling rights with no one anywhere near clear water. Mike G on a SU and Dave Lopez on an old windsurf board (being used as a prone gun) were the farthest out but on this set it made no difference. Both guys had no leashes and lost their boards. The rest of the prone pack were positioned well inside of them and all got mowed by healthy whitewater.

With no one for reference it was hard to gauge the size but it was probably close to double OH. I saw MGs board bouncing in doing those ten foot high leaps that SUs take. The set was so long I made it back out half way and tried to hook into a shoulder on one of the last ones but positioned a little too deep and got nailed by whitewater. Pop went the leash but the board only went about 50 feet.

The really classic thing was Serge Dedina’s son Israel after the set with big eyes and a strain in his voice saying something like “Kelly, do you see any more big ones coming?” He had that “oh man, I don’t need this” look going but as a testament to his grom courage he stayed out."

Kelly once told me, "Guys get caught inside out there and just don't come back". I know that feeling, I'm the guy. A deep winter smack down courtesy of an icy, black Aleutian monster left a mark on me, changed me. When the place is really solid, it's creepy; you're the hunted. There's no set take off spot, and, for me, the fact that socks you right in the gut is this: there's no top end. On the right swell you could scratch over the top of what you think is the worst of it and face an absolute nightmare- and you are totally trapped. It could happen. The place can hold it. And that seed of possibility roots in your mind, it haunts you until you shake it free or you give up.

Really, it's one of surfing's purest moments. You're caught inside, what are you going to do? Some of us never come back, some laugh like maniacs as the axe falls and some put their heads down and paddle back out for more. Like Israel Dedina, eleven years old, shaking it free- and charging.

Top Photo: Kelly Kraus, at the tail end of a fun right- heading for the relative safety of the rivermouth.
Bottom Photo: Synched up: Serge in the background and Israel in the fore, pre-cleanup and ripping!
All Photos: Spidey
Posted by John Ashley at 9:24 PM

fantastic write up. i actually felt the fear. made me kind o queasy. good stuff!

Linter- It's definitely there, a little knot in the stomach when it gets big. It's the kind of place where I know my limit... and I don't feel bad sitting some days out.

Gnarly...felt that one. Great writing and pics.

how bout not writing about it, we've got a good thing here, no need to advertise

Point taken. Respect given- no mas.

I paddled out on my (prone) 10-0 noserider on the east side of Santa Cruz late Saturday afternoon, and quickly found myself wishing for one of my smaller boards. After attempting to duck dive the 4th and largest wave of a set, I felt it flex in a way that made my stomach turn as the wave passed over me. I was sure I would surface to see a buckled or even broken board, but thanks to the half inch stringer and heavy glass schedule, she survived without a blemish. A short time later I was rewarded with an overhead bomb that unzipped at warp speed for a very long time. Needless to say, big boards in big waves require the appropriate amount of respect, and in my case, a trace of raised-hair-on-the-neck fear as well. I may be rethinking that lightweight glass job planned for the Waveyarder...

John
I can understand anonymous perspective and you are very gracious in your acknowledgment of it and in your response to it. You are showing us how to practice aloha.

But please don't stop posting and writing from that very creative and clever heart and head of yours. To lose that would be worse than losing any secret surf spot.

Finally (here I go preaching again) the First Amendment to our Constitution is a right, blessing and privilege many good men and women have fought for and died to preserve. To flee from that disrespects their ultimate sacrifice. End of sermon...

Srfnff- you are a wise and gracious human being. Thank you!

Giapetto! You're killing us with suspense- how's that thing going? And I've never felt that a little weight is a bad thing- I loved how the old school guys would squat and grab on their big old logs and just plow through sections- inertia rules!

Thanks for posting your wonderful and very well written description of our post Thanksgiving session. I loved Kelly's description of the bomb set and my son's reaction to it (he denies being concerned at all--typical 11 year old bravado).

As the author of one of the few published articles on the spot (Longboard 1994), I remember some of the criticism I received that somehow I publicized the spot by honoring the oral history of Dempsey and his friends. The irony is that a few months later I remember surfing the epic 1994 December Holiday season swells with only a few of us out--and then on Jan. 1, 95, Gary H. and I surfed the shorebreak as good as it gets for hours with no crowd. So much for publicity.

For those of you who haven't read Kem Nunn's amazing Tijuana Straits, please do so because he managed to really capture the place in one of the best books ever written on surfing.

I write this as rain is starting to fall. Which means our beloved spot will soon be subject to as much as 100 million gallons a day (!!!!!) of toxic sewage polluted water from Mexico.If the rains continue we'll have to make the choice about how much we value our health by choosing to surf there.

Am I worried about crowds at our spot. Well since our spot was closed 198 days in 2006 due to pollution, it seems that the real issue is not the threat of overcrowding, but closure from pollution. And when it is not polluted out there, 95% of the time the waves go unridden or are pretty empty. I say that having enjoyed the many smaller days over the past few months with my groms with no crowd in sight. Even last week we surfed it either alone. Kelly and I enjoyed one morning last week by ourselves. On the morning in question the crowd did not arrive until 9ish and when I returned in the early afternoon to surf again there were only a few us out.

What I learned from my wonderful experience back in 93 interviewing Dempsey and his colleagues from the 1930s-60s who surfed with him out there, is that when the surf came up--he used to call his friends all over the county to join him in the lineup. So surfers such as Miki Dora, Peter Cole, Walter Hoffman, Bob Simmons, Buzzy Trent, Don Oakey joined him and the Imperial Beach and Coronado regulars who would congregate around the old Palm Avenue lifeguard station before heading down in their jalopies to surf. Dempsey was a master of practicing the Aloha spirit.

Today, the reality is that in the lineup, 80% of the surfers in the water are longtime locals who practice giving waves and sharing the surf in a respectful manner. We are lucky that on the few days a year when the waves break we are able to share them with lifelong friends, our sons and daughters and our surfing brothers. I love it that longtime surfers are bringing their sons and daughters into the lineup and newcomers find their way into the lineup every time it breaks (most of them undergunned and wide-eyed at the sets).

But remember a few days of 4-6' waves is fun--but on those days when the waves break 3/4 a mile out and require a tremendous act of faith to bust through the lineup and then catch open ocean swells on 10' guns is really a very, very different story. On those days, a crowd is nowhere to be seen (I have no problem admitting there are a lot of days that I find an excuse to do anything but punch through that shorebreak and face my worst fears).

I welcome all surfers to feel free to comment on this--but please don't be anonymous--we should feel to express ourselves in a respectful manner, share our opinions. But I insist that it is imperative that we document the stories of the places that we love. Because we are in real danger of losing our beloved spot to pollution--forever.