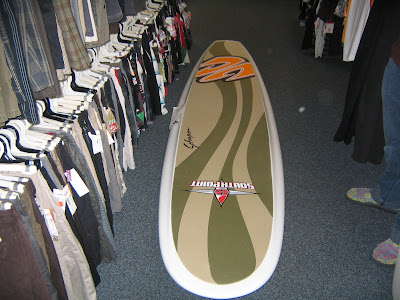 The first wave of molded boards has come and gone. Many of us started on this first iteration of stand up boards. Our boards were typically wide (at least 28", unless you were one of the masochists who learned on the 26" wide Munoz) and long (touching and even surpassing the 12' mark).

The times, and dimensions, they are a changing. The boards are getting lean. Typical lengths are now 10' and below with widths reduced to the 26 - 28" range. The anemia is a result of the development of the sport's practitioners. As last years entry market paddlers climb the learning curve they are beginning to demand more performance from their boards. No longer content with point and shoot surfing; stand up surfers are now looking to drive their boards, find the hidden gears and generally just drop hacks and snaps like they were surfing their prone boards. The shapers have responded, producing boards that trade surfability for stability.

By the numbers. Here are a couple of hot looking boards Kelly just picked up at Emerald City Surf Shop stop by and check them out.

Top Photo: South Point Bonga Perkins Model with S-Rail. 10'0 by 27", 4 1/8" thick, 2+1 fin set-up. This is the board I'd be most interested in test riding. I like the clean, full template with the pulled tail. The board looks like it'd do well carving and nose riding. Additionally, the board possesses a stepped S-rail that may increase bite without sacrificing too much volume in the rest of the board. An interesting idea that I'd like to check out. 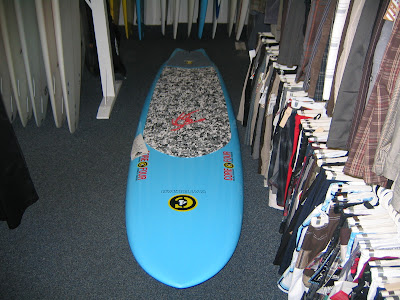 2nd Photo: C4 BK Pro 10'0 x 27" x 3 7/8" wing swallow, 4 + 1 fin setup. Kelly's riding one of these now and from what I could see, the thing is a rocket. I'm not sure how well it'd go for a guy my size (220lbs) since I declined his offer to try it out two days ago in good surf. Blame that on my wave tunnel vision, with nobody else around, I just wanted to nab a bunch of waves. I'm kind of kicking myself now- probably would've been fun. 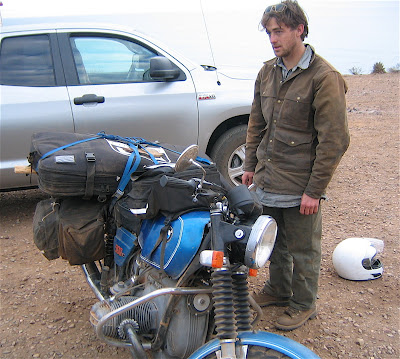 Baja happening:
One of the great things about traveling is the people you meet. Tommy (never did catch his last name) was a firefighter off of a Hotshot crew- he rolled into our camp just after getting bucked off of his motorcycle on his way to the point. His bike's a classic, an air cooled BMW with Vermont plates that he planned to ride all the way down to the tip and back. He had a nifty Pope Bisect 6'10" egg in the case just behind his seat. Just a kid on a bike with a cool surfboard looking for some adventure on the road.

Email ThisBlogThis!Share to TwitterShare to FacebookShare to Pinterest
Labels: stand up paddleboards

Yep- big time fumbled, and dropped the ball on that one. I was so one track minding it out there though- you should have seen it, just big, glassy lumps coming through breaking left and right- 3 guys out, I was just amping. Next time...

Now three and a half years later...are there any of these 10' s-rail Bonga Perkins models around?