8'0 Stand Up Board Spotted in Surf Mag! 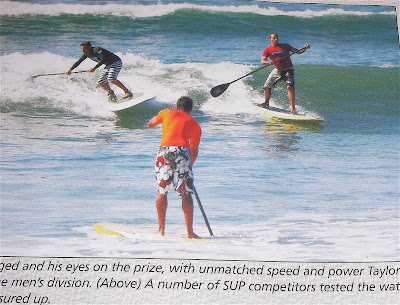 The rain here in San Diego has been pretty heavy for the last couple of days. I don't like to hop in the water when the California State Beach Poppy is in bloom (see last photo). So I've been doing some lurking.

I spend time driving from spot to spot. Catch me sipping a cup of trucker's brew (7-11s finest Arabica) and checking the blown out mush in the morning. I'll chase that with a Stardust Donuts Cinnamon bomb at the Strand mid-morning and then grab an RBC (that's Rice Bean and Cheese burrito) for lunch at the Towers. I've also been logging hours at my favorite library, BookStar in Point Loma.

It's great, grab a stack of mags, snag a comfy spot of industrial carpet (I like to wedge in next to the Wedding Mags- limited interest, low traffic) and kill a couple of hours on a rainy afternoon. Finish it off with a root beer and an Old Smokey (OliveTree Deli) at the Cliffs and you've just capped a great day my friend. But back to the magazines, if you haven't noticed lately the surf mags have been paying a lot of attention to us. The first two pages of Longboard Magazine are full color spreads for Aviso and C4 StandUps. The coolest thing I found was a photo of one of the SUP heats in fall's Infinity Contest. Right there, wearing the jailbreak trunks and setting up for what would undoubtedly be a Chopes style barrel ride, is Tim Stamps on his 8'0 biscuit. A telling comment in the piece, "...there was just as many competitors in the SUP division as there were in the Open Longboard." Watch out world, the janitors are coming to clean up. 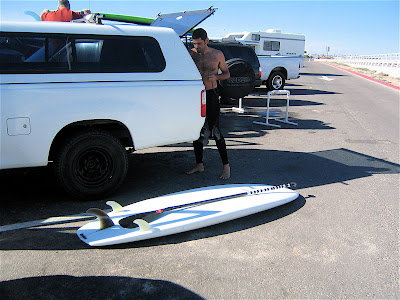 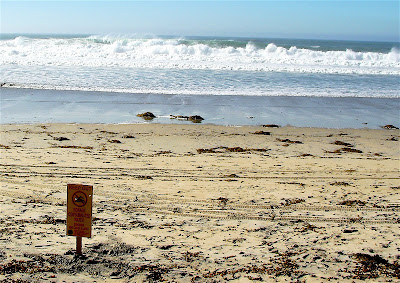 Nice shot of Stamps on the 8'0 Biscuit. Always good to see a shaper who can rip it up!! How wide is that puppy? I don't know much about Stamps, but does he favor shorter wider boards?

Oh yea, love the content on your blog!! I check daily! Great stuff!

Glad to hear you like the blog- I'm enjoy putting it up. Quick Stamps Bio: Heard of Harbour longboards in Seal Beach? Tim was Rich Harbour's protege working for him since he was 12 years old- safe to say he's learned all phases of board construction from a certified legend.

Stamps is on to something with his width to length ratio- check out how clean his latest personal board is in the post from last week (white board with black pad) that's a 9'0- my next one is 29" wide.

I think given the kind of stuff we get here in Ca, Tim is building boards that fit our conditions- and here a little width doesn't hurt (especially in the tail, where it can really produce some drive in a gutless wave). Just a honest assessment of what type of needs a board needs to fulfill.

Did I see a photo of you on the NC paddlesurfer blog?

On reread of my reply: a little bit of a hack job but I think you get what I was trying to say! I'll proofread better next time.

Yep, that is me, the kookmeister himself! NC Paddle Surfer lets me try out all the new toys he buys! I can't get him to like my Naish, no matter what I do! ha ha ha! I thankful to him, as his board testing is helping me dial in my next purchase. I don't have all the time on the shorter boards like he does, so I'm still thinking of something in the 29" mid range may be right for me. I think I'll know more once those guys get back from Surf Expo.

*Trucker's brew (7-11s finest Arabica)
*Stardust Donuts Cinnamon bomb
*Rice Bean and Cheese burrito
*A root beer and an Old Smokey (I can only guess what kind of high carb, high cholesterol fat bomb this might be!)

Just thought you'd like to see your daily delicacies listed...hah-hah...you and me are gonna have to have a serious talk about eating habits...come up north so I can organically dietize your mind.

Don't take this wrong...a person like you is hard to find, and harder to lose...besides if I can't kid you, and you can't kid me...what kind of world would this be? A too serious one, that's what. Aloha brudda!

You see the problem is that I'm half Polish (ask Mike) and so we Eastern Europeans have a real affinity for the carbohydrate- it's genetically imprinted. I have to stuff myself with carbs. And Vodka.

But that's only half the problem. I also look like I'm Aleut. You know what that means, right? I have a need to gnaw on fat, preferably seal fat or otter. But the kind that comes in RBCs or Taco Bell is a good substitute.

Now here's the next conundrum. I know I could probably drop about forty pounds- but then I couldn't sink the rail on my Mahi. If I did drop forty I could ride narrower and smaller boards like all the rippers. So I'm conflicted.

So drop forty or remain... lush.

Yeah, maybe we should sit down sometime.... over a plate of carne asada fries (this food item does exist) and beers!

And oh yeah, the Ashley skin is really thick. Fire away!

Are you sure you're not a fireman? Dish it...vodka and beers on me in the Cruz...