Baja Bad: Some reflections on some bad times. 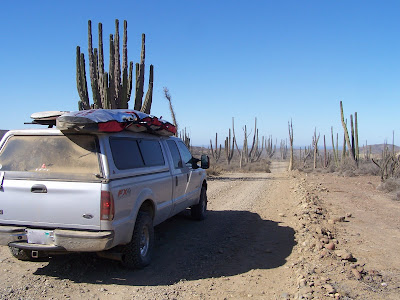 Undoubtedly if you're a California surfer you've heard the scary stories coming out of Baja. To tell you the truth, what's happening in the border region of Northern Baja has been heavy enough to make me think twice about my casual day trips. For those who don't know, here's a quick summation of the latest happenings:

• Three San Diego surfer/kiters carjacked in the early morning hours driving through TJ to the toll road. Highlights: Fake (or not) police pulling them over, guns to heads, execution style kneeling postures, highspeed flight to the border, thousands of dollars in vehicles and gear lost.

• Fishermen carjacked on their way south, again in the early morning. Highlights: Blue lights in the rearview mirror, guns in faces, tweaked out looking "police" with masks, everything lost.

• Family of four pushes for home from San Quintin, pulled over by blue lights at night on toll road. Highlights: Same as before but this time forced to drive into the hills above Rosarito, thrown onto the ground, robbed and abandoned.

• Surfer and girlfriend pulled out of their RV in the middle of the night near Quatros Casas surf spot. Highlights: Bullet fired through the side of their RV, robbed and assaulted at gunpoint.

I am certain that some will believe that these stories are fabrications. I can assure you that they are not. In one case the victims are guys I know fairly well from surfing and kiting. The stories are true. Luckily nobody was killed in these incidents but the trauma they all faced will effect them for the rest of their lives. In all four cases the victims stated that they'd never go back- I don't blame them. In each case, however, there is a thread of commonality that ties the crimes together.

In the case of the carjackings: All were traveling at night. It seems now that driving on the toll road in the darkness in an offroad equipped vehicle may be asking for trouble. The toll road and the road along the border fence that leads up to the first toll booth do not afford you immunity. In addition in each carjacking the vehicles were newer 4x4s (two were F250 4x4s and one was a Honda Ridgeline 4x4) it seems the bad guys know what they want, singling out these particular vehicles. As far as night driving goes, I have to admit that I frequently broke this rule. I'd usually cross the border around 3am, leaving early allows you to steal hours in the day, effectively giving you an extra afternoon of surfing. I've also done the 20 hour marathon of driving from Cabo to San Diego. I'm done with driving at night down there. As my friend Marcos always says: "Bad things happen at night".

As far as the Baja campers are concerned: It's pretty well known that the Quatros Casas/Camalu/Outskirts of San Quintin areas are very sketchy places. There's always been dark happenings in the Shipwrecks/Quatros Casas area, now that meth has found its way down there it is bound to get worse. In my circle of Baja travelers, Baja Sorrow (the region around San Quintin) has always been off limits- the surf has never been worth the potential trouble. In the case of the RV bound campers, the guy supposedly had been going to Cuatros for many years. I was surprised to hear that he chose to camp away from the relative safety of the "surf camp". For you readers out there, Allan Weisbecker wrote about this area in his book, "In Search of Capt. Zero". You'll remember it as the spot where the hills had eyes. And where a Mexican rancher invited him to shelter in his walled compound for the evening. It was, he insisted, safe for nobody at night. I wholeheartedly agree.

Do I think it's safe to travel by car in Baja? I think abiding by the two guidelines I've described can put the odds in your favor, but I've always been one to follow my gut. And right now my gut says there's some real strangeness afoot down there. I may give it a pass until something has been done to restore my confidence (I wouldn't mind seeing their Army patrolling that stretch in their Humvees). Importantly, I don't think these dark tidings have enveloped the whole peninsula. As a matter of fact, I think once you're past San Quintin, the odds swing even more in your favor. Whatever you decide to do, be safe, don't drive at night and stick together.
Posted by John Ashley at 11:32 PM

what do you think accounts for the "real strangeness" going on down there right now? what's changed? what's new? think meth is a big factor? great post, btw: cuts right to the heart of it.

Shoot- right off the bat I'd have to guess that this recent string of carjackings must be happening in TJ with the blessing of the cartels there.

I know that last year an Arellano Felix kingpin got nabbed in La Paz, maybe there's a power vacuum that is allowing some splinter crime-ring to operate. It's be hard to believe that a big drug operation like AF would have to resort to carjacking to obtain vehicles so it's my feeling that it must be a splinter group maybe trying to gain noteriety?

As for the robbery/assault in the Cuatros area- been happening for awhile now. Just too close to a very poor agricultural area- people get desperate, maybe many central Am. immigrants with nothing to lose. Also, very easy to get to Cuatros, well graded road. The old adage holds true: "Good roads bring bad people".

All conjecture of course- not sure what's really going on, just no it won't stop until the billionaire developers along the Rosarito coast step up and pressure the gov. to crack down on it. And with the number of condos being built by the likes of Trump among others I think this may reach a tipping point soon.

Like I said, I wouldn't mind seeing some Mex. Army hummers along the route for a year or so.

Oh yeah, I forgot. Meth starting to be a problem in that Camalu/San Quintin area. Mix that with desperate people and there's trouble.

wow. bad stuff. thanks for the insights ...

John-Thanks for all your thoughts on the Baja problem. After giving it a lot of thought myself I will not bring my wife and two young kids to Northern Baja until things mellow out. It's sad because I have been waiting 10 years to bring my boys on a Baja surf trip. Maybe next year. We will however fly to the tip in spring and surf the East Cape. It's just not the same as a good old Baja dirt camping trip.

Can't say I blame you- just a little unsettling right now. I've got a couple of friends bailing tonight for N.Baja spots that can hold this swell- I'll see if I can get an update when they get back.

Have things improved any? It is now the middle of summer 08 and we are thinking of a family camping trip. As a fluent spanish speaker I always believed I was immune to problems that others had like this. That was cured one year around xmas time when I was pulled over by a "cop" in Mexicali while heading down to canyon tahoe to go backpacking (1993). It was VERY scary, arrested, thrown in the back of his car, driven all over the outskirts of mexicali, and then abandoned when he settled for 60.00, when he wanted 300.00. 60.00 was everything I had. The funny thing is that the cop was surprised when I told him I needed to get back to the border, he said "but you were going camping". I said "yeah, but now you have all my money and I have no food". So he pointed me back to the border and I was on my way. I didn't go back to baja for at least 6 years. I never knew that san quintein had such a bad rap, it's funny, but that is probably the only place I have ever been hassled for camping, when some guy wanted us to pay "protection money" for camping there. This was also around '91 or '92. We never went back. Now we want to take our kids beach camping, and I'm thinking about all the fun I had down there and was searching for a good spot. You have made me think twice. I'm really sorry to hear that things are unsettled. Ah' such is life in the 2nd world.

Heading down to Punta San Jose & Santo Tomas tomorrow for the weekend with my gf & 2 other couples. We're a little a little sketched out but I know Baja, having spent a good deal of time all up and down the coast. I'll post again upon our return to let you know how things go..

Yep, stay away from SQ !!! tweakers are everywhere chopin folks head off- and its super sharky- and the wave s suck!!!.....just keep going, oh yeah its butt ass cold too!