I paid a visit to the Stamps board factory last weekend and came home with some goodies. I ordered up a new surfboard (not a stand up- this one's a 6'4" quad fish, a second board for my upcoming mainland Mex trip) and brought home a new center fin. This one was freshly cut, a 7" hand shaped concept fin from Future Fins. It's a smaller version of the 8.5" fin I'd tested earlier. In short, this is a killer fin- but it does take some dialing in since it's a much different fin then anything you're using now. Check it out: 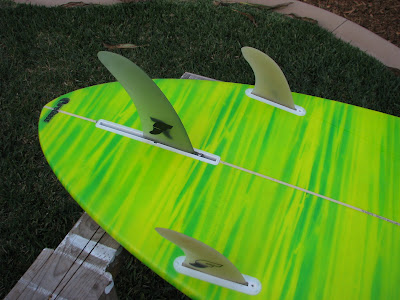 The fin's got a similar template to the big 8.5" fin I'd received earlier. The last fin worked well as a single fin setup in my 10' and over boards. The 8.5 was loose, pivot turned nicely and delivered a nice, drivey, solid feel. It was a good noseriding fin. In the 9'4" Viking, however, it was just too much fin.

I thought that the fin might do better in a smaller board if it was scaled down a notch and in passing, mentioned this to Stamps. Next thing I know there's a little "care package" waiting for me- are you kidding me??? Stoked! You should know that the Futures guys are full on fin specialists- it's all they do- I was amazed at how quickly they could go from idea to prototype. And I was blown away to find the smaller version waiting for a willing test pilot- I was on it! 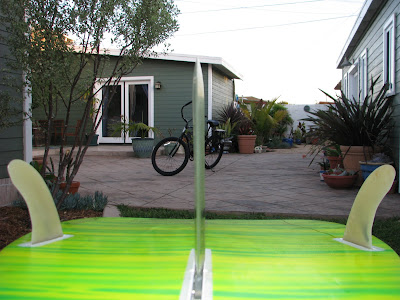 The first thing I noticed was the thickness of the fin's leading edge. The thing is actually pretty darn bulbous from the tip to the base. The leading edge reminded me of the nose of a nuclear sub, rounded without any really sharp edges. Stealth fin. Nuke subs are made to slither through the water with maximum efficiency- I could only guess that this was the idea here. 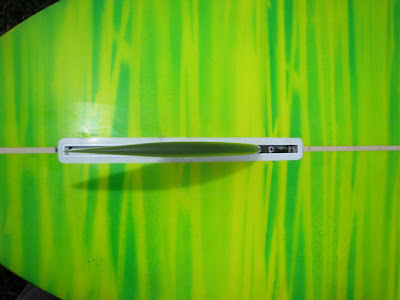 Check out the foil of this fin and you can see how wide the guts are on the thing. 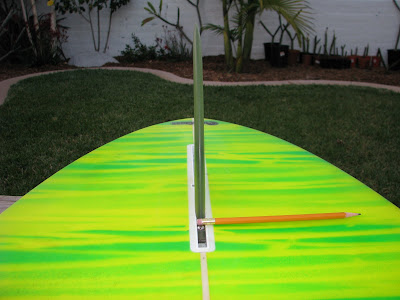 Here's another view with a pencil for scale- beefy! 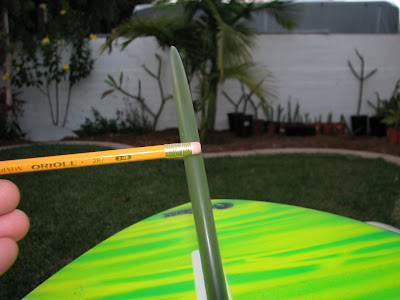 The thickness carries all the way through to the tip of the fin. 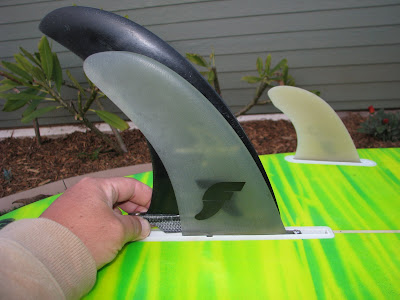 The template of the fin is much different than the typical dolphin fin shape. It has a reduced base to it and is not tapered much towards the tip. To me this one looks like the wing of a plane.

The ride: I've surfed this fin four times now in conditions ranging from clean two foot peelers to four foot chunky beach break dumpers. It's been an interesting ride. At first, I positioned the fin in the same spot as my standard fin. Right of the bat, I was disappointed. The fin made the board feel really stiff. Even worse, the board tracked down the line with no release off the bottom. I was bummed. I surfed it a couple more times and went in ready to switch it out for my regular fin. 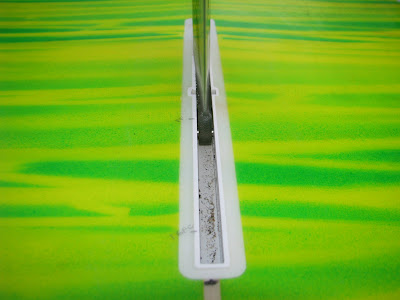 As I was backing out the fin screw I started to wonder if all the rake in the template of the fin might allow the fin to work well from a forward position in the box. On a whim, I slid the fin up in the box as far as it would go and tightened the screw back down. In the past, I've favored my fins back in the box (check out the photo above and you can see the pencil marking for my regular fin position, compare that to how far forward I've moved this fin and you can see what a big change this was) preferring a solid, drivey feel to the skitteriness that comes with fins placed too far forward. But I moved it anyway figuring I'd give the thing one last chance.

What a change! Something clicked with the fin in the forward position- it came alive! I remember the first wave I surfed with the fin pushed forward. The little wedge came fast off the edge of the sand bar. As I took off, I thought I was a little too deep to beat the little section setting up in front of me. Serious speed was required. Dropping in, I pumped hard off the bottom of the wave. Driving through the turn, I unweighted hoping that the fin would release, letting me complete the transition from inner to outer rail. My mind knew where I had to fit the board to make the section but it was up to my equipment to get me from point A to point B.

That fin, however, is FAST, and it released off the bottom seamlessly. I was flying down the line. It's hard to describe the feeling when things come together like that- what happens is your equipment begins to feel like a part of your body. You think it and it happens. That's the feeling you get when you start to dial in your gear- it takes work and experimentation but it's worth putting in the time to get it right. 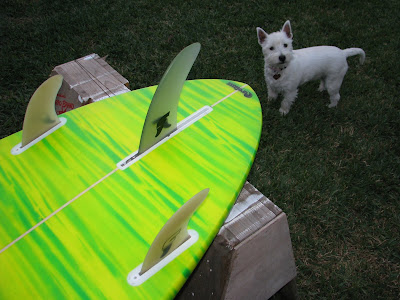 I'm stoked on Future's latest offering, these guys are risk takers and innovators. Here's a fin that looks the total opposite of most fins you see in the surf shop display case, it's bulbous leading edge is weird... but it works. If you've got a board in the sub-10' range and you're looking for some extra speed and looseness, try this one out in the 7" size. Take my advice and start this one forward in the box, work it back until you find your sweet spot. It'll take some time but believe me when you hit that magic groove, it'll be worth all the fiddling around!