Back into the mix... finally!

I don't know who has the John Ashley voodoo doll and I have no idea why they've been sticking pins into it but I can tell you this- that black magic is nasty stuff. I've been down and out with two different colds (a head cold that migrated down into my chest), a throbbing left elbow (that one's the product of some over enthusiastic dory rowing) and some perfectly horrible timing that had me sidelined while some of the best surf of the fall came rolling into town.

It's been tough- being so out of it. Most of all,  I realize I've been taking my good health for granted (this happens every year, right after the flu season's first cold hits me). The old saying's true, you don't know how precious it is 'til it's gone. And I wasn't made to watch life lying on my back in a Nyquil induced stupor. So I fired up and got myself to the beach this morning determined to surf, regardless of how the conditions looked.

What a surprise! Overnight, we picked up a nice little impulse of swell that, once again, comboed up with excellent, offshore, Fall conditions. I got to the beach a bit later than the usual suspects (credit for that goes to last night's multiple beers- PacMan WHAT?) but I didn't miss anything. In fact, the surf improved as the morning went on. And I was on it: I scored four or five absolutely stellar, overhead, left-handers that came rumbling through the outside shore break. 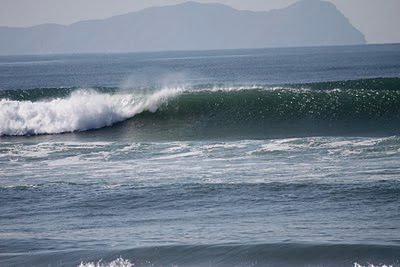 Riding those big blue lumps on a loose, light stando is like snowboarding a big open bowl. It's a carve factory, you link S-turn to bottom turn, top turn to cutback. The best wave I picked off ran itself into an inside wave and formed a thick, top to bottom, double-up section. I dropped in on the first peak, looped into my first bottom turn and realized that the double up was going to throw ten yards in front of me. Time to jam! This is when having a super light, finely foiled board really pays off.  The boards we're riding now are light years ahead of the molded monster stand ups we were riding three years ago. We've found that foil (the distribution of foam from nose to tail) is hugely important. All of our boards are thin in the nose and tail allowing them to respond quickly to even small shifts in weight; get over your front foot and it's like snapping the throttle on a two stroke dirtbike- POW, you're gone. 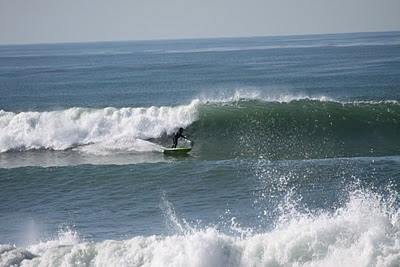 And I was gone, driving my board, milking that thing for all it was worth. Legs pumping, I was getting a rhythm going: compress off the bottom, extend and release across the face, over and over as fast as possible, eating up huge section of open face- racing for the safety of the shoulder. The bottom dropped out, the lip heaved and the impact right next to my outside rail shook my fins free of the face. The tail of my board got sketchy, washing out, putting me in a really bad position. Fall off here and you take the rest of the lip right on your chest, pile driving you straight down into the cobble reef, you end up tumbling as giant water hands push you deeper and deeper. 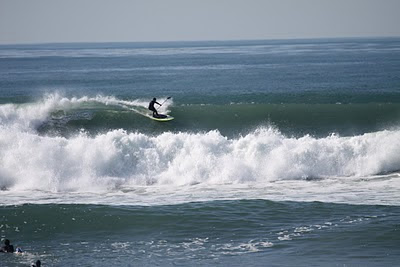 Black magic. Voodoo dolls- bad stuff... but not today. Today, I was loving it all- brutal wipeout or victory cutback on the shoulder it wouldn't have mattered to me. I was healthy, paddling, surfing and laughing with plans on the horizon and adventure just a couple of weeks away. Most importantly, I was back in the mix- in the thick of it and, to me, that's all that matters.
Posted by John Ashley at 7:50 PM

Good to see your back in the water,sorry bout the bad run.
ummmm wheatgrass

Really? Wheatgrass? How do you "do" wheatgrass- because if it helps, I'm on it!

When I lived in the states..the health food store,they cut it, juce it fresh, down the hatch.Thaste like a freshly cut lawn(you get used to it)..like eating 2 lbs of leafy vegies.
Full of good stuff..clears up all kinda things..can even stop graying hair...lol