Paddle Surf Video: "Living the Stoke"... Get a copy, this is a killer film!

I was blown away to come home from surfing this afternoon and find this in my mailbox: 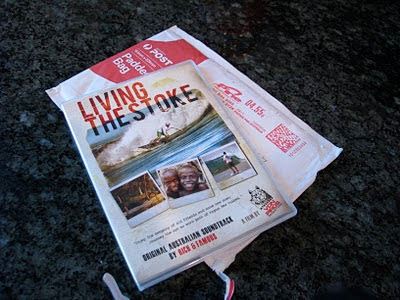 I knew the Von Piros crew, the minds behind the film, had pulled off an unreal stand up paddle trip to Papua New Guinea. A film was rumored to be in the works, we'd all seen the photos leaked to the internet. The boys contacted me a couple of weeks ago asking me for my address- they'd finished the film and wanted me to take a look at it. Are you kidding me??? Next thing I know, I'm standing in the kitchen with my very own copy. Stoked!

The film follows a group of friends as they paddle surf the remote (and shallow) waves of Papua New Guinea. Hide your credit card and passport, after you watch the film you're going to want to book a flight to this tropical paradise of beautiful waves and people. The guys score super fun looking waves, surf with the eternally smiling children of the islands, sample exotic fruit from the local farmer's market and spend time touring the beautiful jungles, estuaries and beaches of the country. One really cool aspect of the trip was the idea to deliver books, clothes and other gifts to needy locals- I thought that was pretty darn cool.


The film is so much more than a mish mash of paddling footage chop-cut to music. It is, in every way, a super slick, professionally edited and expertly composed paddle surf travelouge. I'm not sure if these guys are professionals in the film industry but if they're not they may want to consider a career change. I loved the "accessible" feel of the film- there's no big name pro stand up paddlers just guys like you or me having an awesome adventure. The effect is that you get the feeling that you could pull off a trip just like this one... which get's me way too fired up, my passport starts crying!

I really enjoyed the film, "Living the Stoke". If you get an opportunity to grab a copy, don't hesitate- I'm sure you'll love it.

Get more information at: www.vonpiros.com
Posted by John Ashley at 9:40 PM

Thanks John that's such a great wrap up , you really got the feel of the movie. We are already planning the next trip.

Some where in Africa is the next play ground....watch this space.

A great film Rob- stoked to hear about your next adventure!