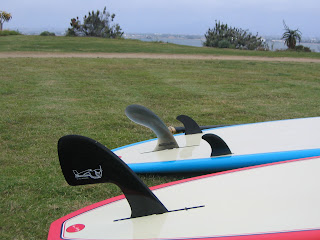 This Week: I'm getting excited to head north this Wednesday. I'm going to make a day out of it and paddle San-O early in the morning and then head to Seal Beach to hook up with my friend Tim Stamps. In addition to building some unreal surfboards, Stamps has been crafting some sweet looking paddleboards (check out www.surfboardsbystamps.com). If I get my way I'll be test riding some of his new boards that afternoon. You'll get the full report and lots of photos so check back for that one.

Mid-August: I'll be loading up the truck and trailer and pointing it further north to see what kind of flat water and surf paddling central California has to offer. Once again lots of photos and information to come.

Also: Paddled La Jolla Shores this morning- waves were small but fun, leopard sharks in full effect at the North End. If you haven't been out to see these guys and you're in San Diego make sure you set aside time for this run, it's worth it. I may have to return for some photos of these guys.

And: I jumped in this evening down the street (here in Imperial Beach) and it looks like that little S. Hemi. bump is starting to show up- definitely some size compared to the last two days. Kind of a fun little session on the Sean Ordonez Big Blue (yes, borrowed from the wife) which is now my board of choice- this brings a whole new set of problems to my household. Happy problems I guess, but problems nonetheless (look for the Big Blue's review coming up!). Regardless, I'm getting excited at tomorrow's early a.m. options.

Finally: Hey fin experts, give me some feedback on what you see in the photo above.

The first fin is an FCS "Fatboy". I just had it laying around so I threw it in my wife's board (10'10"). The fin was laying around because I don't like it. I'm a fin idiot but to me, the fin doesn't like to be pushed unless it's up to speed. On the first bottom turn, I can get the fin to "catch" (stall?) when I push with my back foot like I normally like to do. After you get it going down the line it works better- but that first turn needs to be nursed. Am I wrong here? I have a feeling that running it with the two side biters is not how it should be used- but hey, I don't know... so I'm asking you for feedback. What do you know about these type of fins- what are they all about?

Next up is the big Greenough Stage 6 fin, anybody else got one or used one? Give me your impressions of the fin- I'm going to reserve my feelings about it until I hear what you've got to say... so don't let me down!
Posted by John Ashley at 9:14 PM

What time you heading out at SanO. Ill come down and introduce you to the boys and if you want a little stroke and giggle on some of my sticks then so be it...

You make it sound so tempting! I'll be there by 7am- look for the Ordonez Big Red- I'll bring my camera.

John, missed you this AM. Pretty fun session. Probably get some more later on.

Sorry Tex! Had a couple of items on the "get this done before summer's over" list that had to be tended to. Let's surf the Cliffs next week.

yesterday Matt DeLine (one of the Cardiff guys and a business associate of Tom English) and I paddled from Torrey Pines to the Shores - great paddle with a few good waves. Anyway, he just got a Wingnit model fin that looks very similar to the fin on the board in front. He said it loosened up the board immensely but still held in well. Matt's a very good surfer and I would inclined to take his advice.

There you have it. Hope all is well John. Let's try to paddle this weekend?

Was that you on Big Red this morning at SanO? I was out for a short sesh on a 10' C4. Great site you've got going. Maybe catch up with you on a surf down south or south of the border. Chris K. Capo Beach

Hey Chris! I was at San-O on Wednesday morning- from about 6:45am to 10:00am- You were the first guy out there, weren't you? Turned out to be fun- that's a nice spot you've got there, fun waves, really nice people in the water. Let me know if you come down this way, I'll show you around and the paddle surfing potential for Baja is pretty much wide open.

Mike P.,
Sounds like you guys had a nice paddle- No.County water is so user friendly- clear and warm. Thanks for the feed back on the fin- I spoke to another friend about it and I think I can better translate what I felt with the fin to what the fin was doing- and I'll try to communicate this to the world in general, if that's possible. San-O was super fun- really nice people up there- everyone seems to know you!

John - Don't have your e-mail but I thought you might want to post this up on the blog:

Jimmy Lewis California Road Trip July 26 - August 6th
They've got all the gear including the 11' and new 10' standup boards.
Cardiff on Friday 8/3 starting at 9am
Malibu Surfrider Saturday 8/4 at 9am
Sunday/Monday to be announced.
Stop by and say hello to Jimmy & Trip !!
http://www.realkiteboarding.com/index.cfm?page=newsitem&id=1281