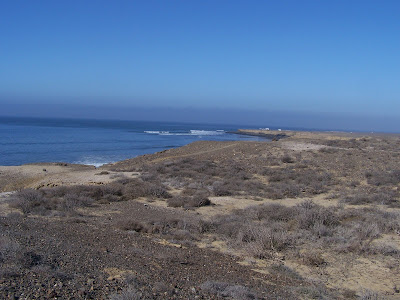 Punta San Carlos is beautiful and worth going to for some point break paddling. It does get wind though and since it's blows pretty much straight to side-offshore from noon on, it pays to be a multi-dimensional water creature (ie learn to kite or windsurf to extend the fun zone). 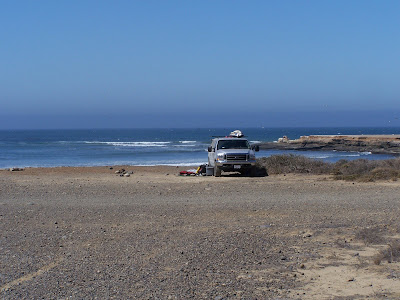 We rolled into San Carlos early in the morning and it was still relatively glassy, totally do-able for the stand up board. I was able to surf the Chili Bowl which is an inside right point. The wave is well known to kite and windsurfers who fly down the line cranking huge top turns and basically carving the shit out of it. It's a fun stand up wave, fat and pretty slow but a long ride with some steeper sections on the inside for nose riding. It's worth the hour and a half dirt road in, which I'm naming Camino de los llantes- I've never seen so many discarded tires on one Baja road.

There are other wave options in the area in addition to the Chili Bowl. Before it got too windy I SUP'd out to the outside Bombora and snagged a wave from the outside all the way to the inside beach break but I had to crouch down to keep from getting blown back off the wave by the strong offshore winds. Even better, I think there are more points inside of the Chili Bowl that'd be great on a big south swell- but you'd need to get on them before the wind comes up.

We did try to kitesurf it. I needed a smaller kite. I was able to make a couple of reaches on my 9m Caution Answer, but I was out too early and the wind was hit and miss. Later, I relaunched the 9m again, dove the kite once and the chicken loop snapped- on inspection, there was only one piece of webbing holding it together- pretty cheesy construction. Luckily it broke on the beach and not out to sea, it would've been a long ride back in with offshore winds blowing me further out to sea and down the rocky coast.

Little did I know that this scenario would occur all over again at a different point break with almost disastrous results.
Posted by John Ashley at 1:11 AM