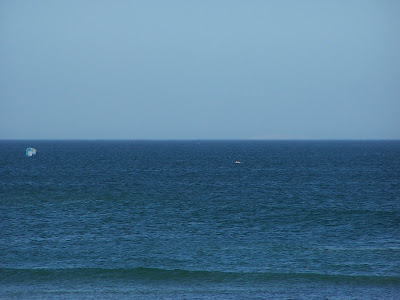 We rolled into Punta Abreojos late in the afternoon. Winds were strong offshore, but flukey with lots of holes. The inconsistent offshore winds probably explain why I ended up having to paddle out to sea to rescue a kitesurfer who was headed for the horizon.

The kiter had crashed his kite and couldn't relaunch it, the wind was blowing him further and further from the shore. I was able to catch the guy after about a half hour of solid paddling. He was making it more difficult by trying to self rescue himself by holding the ends of his kite with his hands (you can see the kite in the photo- the self rescue attempt wasn't working out so well). When I finally caught up to him, it was getting dark, still blowing hard offshore and I did feel a little bit of, "What the F... am I doing out here?"

Fortunately I was able to roll up his kite, lay on top of it and get him to paddle himself in behind me. He came in at Razors- I paddled a quarter mile up the coast to the sand beach since walking in over barnacle encrusted lava rock lugging a waterlogged kite and my 11'11" paddleboard wasn't sounding so hot. 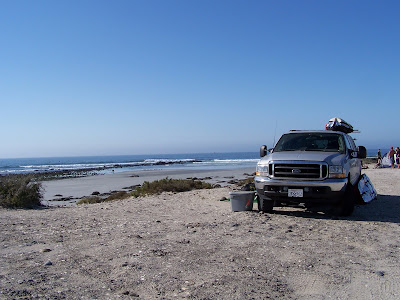 Abreojos is a sweet spot. I ended up paddlesurfing it for two days- we camped right in the dunes in front of Burgers (the mushy point, most people camp here). The water was low 60's but with the SUP, trunks are possible. There are other spots to camp at further from the point, and there are multiple points on the inside and further south- all await someone like you to haul your ass down there and paddlesurf it.
Posted by John Ashley at 11:35 AM

what the fuck is this world coming to...?

ah that comment won't get approved. but come on man no need to post about this place.

Not afraid to post your perspective- work a little harder though, give me a bit more of an argument for not stand up paddling it.

I'll make one: No need to stand up paddle the main point- many other more spots in the area if you just drive around a bit where there will be nobody surfing. We're talking like five minutes in either direction...

And... place ain't a secret- wasn't fifteen years before the road was paved and it sure ain't one now.