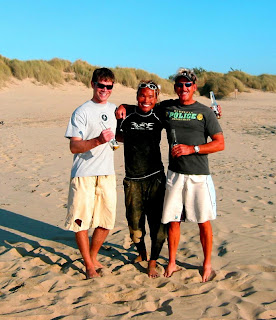 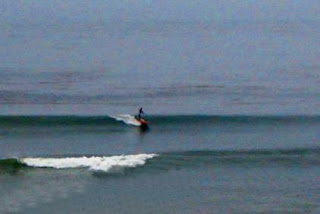 Well we're getting a little eclectic here with our photo collection but there's a reason for it.

MOFO (the guy on the right in the photo to the left and stand up paddling into the wave below) decided to merge his origami skills with his hidden Martha Stewart to create a camera neck "holster" for his waterproof Olympus point and shoot. He used scraps of wetsuit material, glue and hand stitching to put together a really functional and robust camera housing. The water photos were his first attempt with the new camera rig. 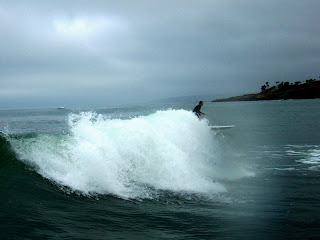 I'm going to talk him into letting me photograph his new camera holster and will post it soon. The other photos are of Kelly Kraus surfing Cliffs (photo to the left) on his new C4 Waterman 10'0 a board we'll be reviewing soon. I'm the screwfoot fading left to go right at the Cliffs. Conditions were pretty meager yesterday (7-15-07) but we were able to get into some fun waves once we paddled far enough south. 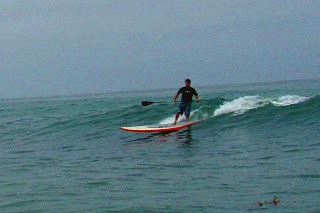 I'm excited to get into the water photography game. Last week I ordered a Sanyo Xacti waterproof camera that will allow me to videotape and photograph in the water. I think the MOFO housing will make it user friendly by keeping it close at hand but not allow it to dangle all over the place. The camera should arrive next week and I'll have it in the water as soon as possible. Be sure to check back for the shots and video.

Note: The other two gentlemen in the top photo are North kiter John Klinger (Klinky) on the left and Kinsley Wong of Xtreme Big Air in San Luis Obispo. Klinky is a Strand local and has been stand up paddling a Mistral Pacifico when he's not lofting himself over the Cay's overpass.

Also: Kelly Kraus is the owner of Emerald City surf shop in Coronado on Orange Avenue. If you're interested in checking out the new C4 Waterman boards you should go to Emerald City. Kelly's the only guy I know of that has the whole range of C4 boards and he rides one everyday so he knows what he's talking about. Go check'em out!
Posted by John Ashley at 11:52 AM