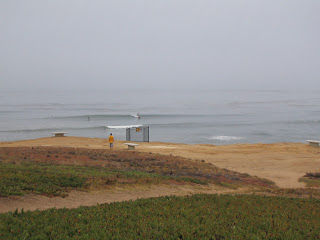 Sunset Cliffs was made for stand up paddle surfing. Purists, locals and Senor Stink-eye (do you know the guy?) are cringing right now because they think I'm going to expose the place. Don't worry, it's been done already- ask Bank Wright about that. The great thing about the Cliffs is that it's got all the key elements of a classic stand up spot: fun waves, conveyor belt channels and (the best part) "non-spots".

The Cliffs holds just about any swell and it's reefs form the energy into a playground of fun peaks. There's always a corner to be found somewhere out there. MOFO (my good buddy and a Cliffs local) and I were able to hop on the last few days of a southern hemisphere south swell. The water was a ridiculous 72 degrees- easily trunkable and with the SUB we were set to cover some yardage.

Our hop in spot was at Osprey- slippery but probably the easiest way in when hauling a 12' epoxy plank. Paddling south we played hit and run on any peak that looked fun. We were at a wave just long enough for everyone to realize we'd just snagged a good one and then we were gone. The routine was straightforward, take a left if you had to but try to get a right if you could; the rights got you further south which was our goal. Rights all the way south, Lefts all the way north- simple.

I'd rather paddle out through channels. Yes, it is satisfying to learn the skills needed to punch through line after line of whitewater and breaking wave- but I'll take a channel any day. It's almost unfair how perfect the Cliffs is in this regard for the stand up surfer. The channels might as well have green interstate signs on them that say, "Easy way to more waves!" Surf a wave, paddle through into the channel and repeat about thirty times- not a bad way to spend a few hours.

The greatest thing about getting on the stand up board is the opening up of what I call the "non-spot". It's that boil that you've watched waves mush over for years, or that outside bombora that looked to be a mile away, or that little reef that is cut off from most people by a high tide. Are you starting to put the numbers together? Let me make it easy for you: The Cliffs is full of these spots! Put together a tidebook and a paddle and you can get yourself (and in this case MOFO) into really fun waves all by yourselves, every time.

MOFO and I ended our southern run at 33's. A fun spot- made even better by the isolated nature that a high tide brings to the place. On another day we'll head even further south, eventually surfing the semi-untouchable spots at the tip of Point Loma but that's a story for another day. Until then I'll look forward to the twenty lefts I'll ride on my way back north to Osprey. 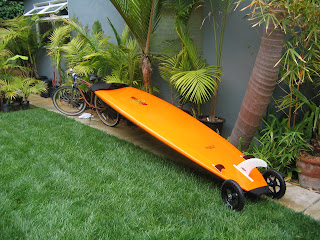 Check this out: This is a cool trailer that MOFO has for getting from his house to the Cliff's. Simple design, looks relatively rugged and costs around a hundred bucks. I'm going to have to get one now that I've seen it. The one question I have is how do you lock it up so nobody rips it off?
Posted by John Ashley at 8:56 PM

The MULE works great. I'm on my second set in 2 months. First got ripped off. Now I chain them to large driftwood (Newport, Oregon). This is definitely a problem that has to be addressed if you are paddling out of sight of your wheels. Richard Day

Welcome to the blog- Newport Oregon- I love the Oregon coast. Are you stand up surfing in Newport? I'd love to see/post some photos and get a little report about what's happening up there.

The MULE looks great- I'm five blocks from the beach so there's no reason for me not to ride down there- other then the fact that my SUB is 12' long! So, I'm guessing that you just loop the chain through the webbing? And then around a huge piece of driftwood- I would absolutely love to see a photo of that. If you can email one to me that'd be cool: paddlesurfbaja@gmail.com

Let me know if you're ever down this way- you'd love to paddle to Blacks... in trunks!

Hey Richard and John. I am the inventor and owner of the MULE. A suggestion for locking the MULE is to use a bicycle cable lock. Slide the cable through the mag wheels of the MULE and then through the wheels of your bikes or arround a tree, sign post, ect. You can view the MULE at www.muletransportsystems.com. Thanks for the comments, James Wilnau