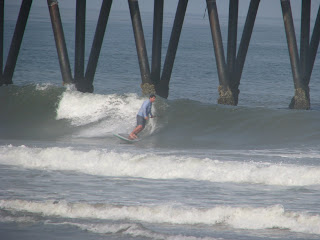 Flip/Flop #2: I'm a big fan of the 2 +1 fin setup. In the center box I tend to ride a bigger fin then most people. I like the positive feel coming off the bottom and I like the bite when you wrap a cutback at full speed.

I've always been really finicky about what type of center fin I like to ride- I can't stand cutaways (I still haven't flip/flopped on this one but give me time) they don't feel like they've got any real, peddle to the metal drive to them. Cutting away the base of the fin just seemed to emasculate that design- those fins have got no balls. Cutaways were bad but I never really opened fire on them here on the 'net. I sniped at the flex fin.

I had this major hang up with really flexy fins. I always felt they had this "hitch" in them- kind of a little stutter in the smooth arc of a bottom turn. And, of course, I was pretty vocal about it- basically character bashing those innocent bendies. Well, I'm over that- they're the only fins I ride now.

I've come to love the little snap they deliver on the exit side of a powered bottom turn. In fact, just to see if this was all part of my imagination, I switched out my 9" flexy for a stiff conventional fin. It's been a let down, I keep waiting for the extra-juice in the last degrees of my turning arc and it just ain't there. There's no money shot.

In my case, I didn't get used to the flex fin until I committed myself to it. I needed to ride it, fixed in place in the box, with the same side fins, for two months. It took that long for me to adjust to the twang that the fin delivers. I also had to change my riding style. Stiffer fins and cutaways give you more of a short board feel because you can pivot turn the board quickly with ankle power alone.

Flex fins require you to use much more leg and hip in the build up to the turn- it's a fin for power surfing. Instead of pivoting the board at the top of the wave, I had to learn to drop straight down, gather up speed and torque the board through the bottom turn. Torquing the board loads up the fin which releases all that energy as the turn nears completion. That's the snap- and I'm a huge fan and a huge flip/flopper.