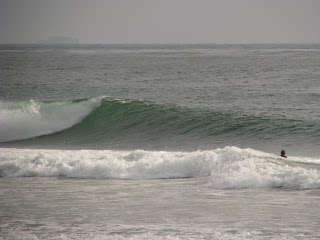 I spent the majority of day paddle surfing. There was plenty to surf too- that south smacked us good! Early morning low tide brought chunky wedges up and down the beach. There were some long periods between sets so I was able to stand up paddle straight out without even getting my hair wet.

Avoiding the pack, I paddled up the beach to open water and quickly snagged two fun head high waves. Souths are great here because if the direction is just right, the wave will sweep up the beach with just a touch of angle on them.

The result is that a wave that looks like a close out will open up a bit. You can travel much further than you thought possible as long as you've got your quick feet on and you've got a board that can go rail-to-rail. Beach break stand up in anything over head high isn't for the weak and an old school "point-and-shoot" mentality just doesn't get it done. You've got to be able to drive down the line.

The morning's last wave sent me home stoked- even though I blew most of it. The wave was a meaty one, definitely one of the long period set waves. I could tell as I paddled into it that it was going to run really quickly up the beach and it was going to barrel. As I paddled in I thought I was too deep but as I said before even the close out waves can open up a bit. On the drop I could see the shoulder hold back for just a second, slope down and then gather itself up into a big fat wall- if I timed this just right this could be a big, throating tube ride.

I've been working on bringing my first bottom turns farther down into the flats before laying the board over and powering down the line. The reason being that I'm generating too much speed by turning mid-face and sometimes outrunning good, steep sections. I've missed a few barrels by going too fast. So the alternative is to drop down straight, hold back a millisecond and then lay it over into the pocket just as the curtain falls. The problem here is that you've got to have perfect timing, a strong check-snap in the pocket to keep you from becoming embedded in the lip and pretty much balls of steel. I was missing out on at least two of the three.

What I wanted to do was run for it but I managed to hold back from turning mid-face, torquing up the flex fin and burning down the line. I even managed to hold it a beat while the wave gathered up and prepared to pitch. It kind of fell apart from there. As I came down onto the flats the critical moment to hit the bottom turn and drift up into the pocket came much sooner than I thought- in fact, I think I was a microsecond late on it.

I jammed my turn as hard as I could and as I came around I could see the lip start to fold over me. Bam- I came back onto my heals and check-turned right in the pocket- if you miss this second turn, you'll follow the course of your bottom turn right over the falls. As I felt my heels dig into the turn I could see the lip make it's loop over me and pitch across the front of the board. I was looking out at daylight, watching the lip spin around me and the bottom of the wave drop out. Barreled.

Unfortunately for me, holding it all together when it's sucking out that hard is a little outside of my skill set. Somewhere on the 'net is a picture of Laird barrel riding a 12' nose rider at Teahupoo. He's riding the barrel on his backhand, his feet all the way across the stringer. The guy unbelievably holds all of that rail to the face of a wave that draws water off the sea so hard that it basically turns itself inside out. I'm definitely no Laird, and remember the "balls of steel" requirement? I came up short on that one too because as soon as I felt it start to come apart, rather than try to make a correction and ride it out, I bailed out as quick as OJ in the clinky.

But I did wash in with a smile on my face and that was good enough for me. Hope you scored too.

I live vicariously through your posts. I SUP Oside and SanO a lot but miss IB. Great waves, stanky water... Lates!

You must know this place! We don't call it "stanky" we call it "organic" water- this place is getting yuppified!

has any one seen alice?captneg9