More Photos from the Feeding Frenzy.

In all the excitement, I forgot to tell you my reasons for calling this day the "feeding frenzy". There are basically two things that brought about the title. The first one is obvious, the second one is.... sinister! 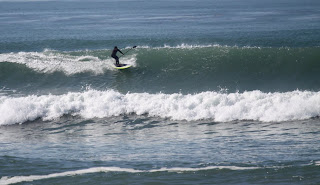 Like I said before, the spot is far enough outside that not too many prone guys like to paddle out to it, especially if you have to chase the peak around. The result is that if you're the only stand up guy out there it's all yours- go ahead, stuff yourself, have a feeding frenzy.

Second, I'd been told that it gets "weird" way out there sometimes. And I've felt it too. You're all by yourself way out there and it just gets really still and you feel like you might see something. 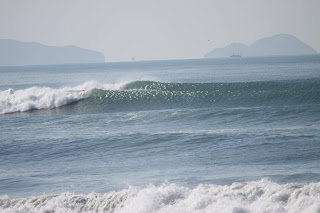 My friend Stu once told me that Kelly and I were crazy for surfing at sunset way out side at a peak that both sizeable and lonely. Stu's a bass fisherman so he knows all about the habits of predatory fish. I guess when Stu saw us sitting around, off of a reef that drops to deep water, at sunset, he got the idea that we probably looked like a couple of nice shiny lures. But there's no giant largemouths here, I'm thinking of something a little bit more toothy, a whole lot larger and, in general, hungry. 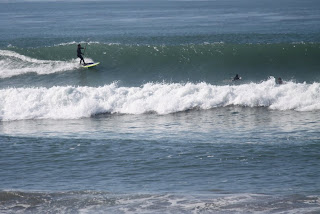 You'll say, "There's no sharks out there, that's Nor-Cal stuff". That's what I always thought too. Until my friend Stukey pointed out the dead seal on the beach, with the giant hunk bitten out of it. It was like somebody took a razor sharp ice cream scoop and scalloped out a 30lb chunk of prime pinniped loin. Worst part? It was laying there dead and filleted right in front of the reef I'd just been surfing. It just gets you thinking. 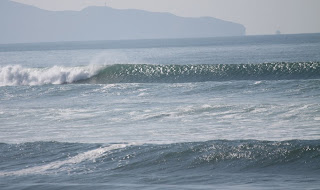 And even though there's a bunch of these rolling through, you start to get the eebie/jeebies... and you begin to think it might be time to head in. Stuff like that just get's in your head. 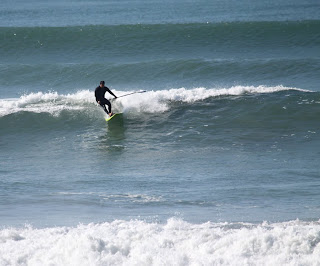 So I did. Until I surf it again tomorrow.
Posted by John Ashley at 10:41 PM